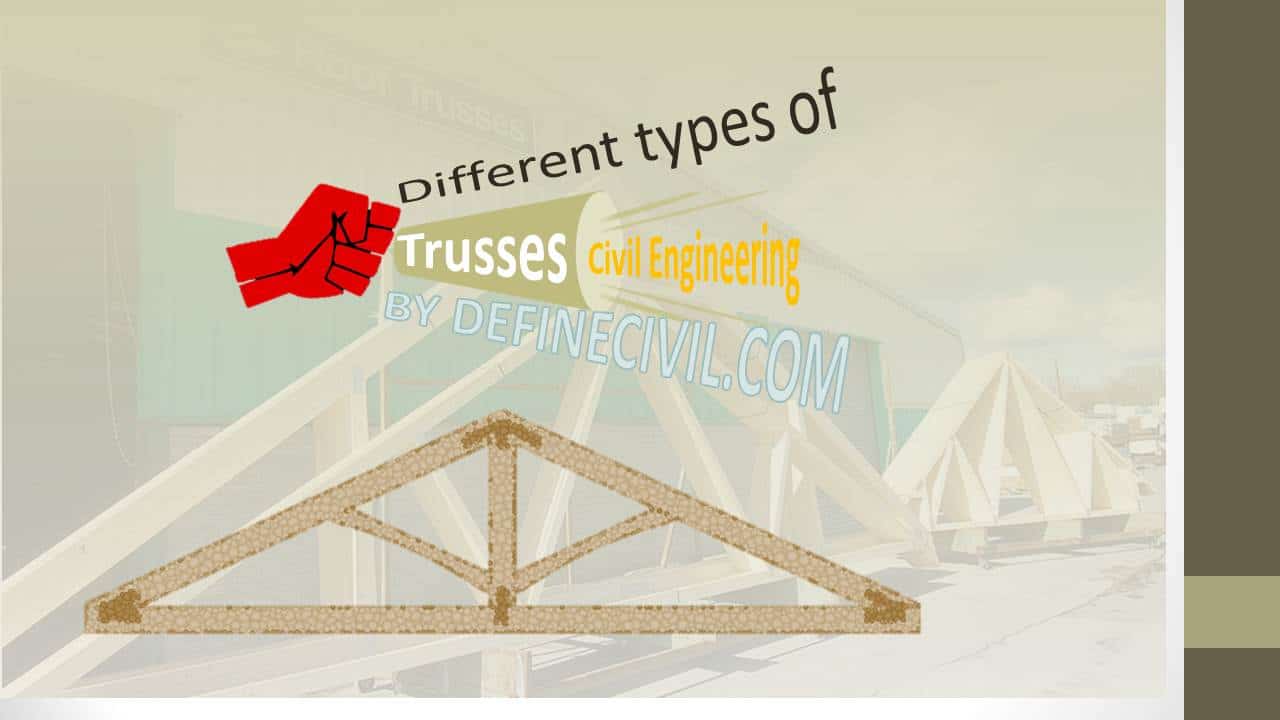 Are you searching for what is a truss in engineering and what are different types of trusses? Search no further, because this blog has a whole lot of information about trusses, their application in construction, and different types with diagrams.

So, let’s get started:

In Civil Engineering there are different types of structures and truss is one of that types. You might have seen trusses as railway bridges, support structure for long span buildings like airport terminals, aircraft hangers, sport stadiums, and auditoriums.

The main reason behind popularity and demand of trusses in engineering is their ability to carry heavy load despite light weight. Trusses are well known to creating strong and long-lasting structures with reduced deflection. Most of such trusses are of steel because steel is light in weight and has a higher strength than other construction materials like timber.

Component of a truss

From structure point of view, we can define truss as:

A structural element that consists of members connected in such a way that the force is applied to only two points. Although, designer can arrange the members to form any shape or configuration but generally trusses comprise of triangular units that are straight members connected at the end joints known as “nodes”.

In a typical truss, forces and reactions are considered only at the nodes and they are either compressive or tensile forces. In order to satisfy the requirement of two-force members, bending moments are excluded.

With such, truss meaning a plane framework of individual structural members that are connected at the ends or nodes to form series of triangles that can span large distances.

If you consider a typical truss, the basic components are upper chord, bottom chord, diagonal member and vertical member. These elements are arranged to form one panel. The total span of truss is divided into uniform or variable panel length.

Types of Trusses with uses and purpose

Depending on the dimension of trusses, there are two types of trusses – planar truss and space frame truss.

As the name suggests, a planar truss consists of elements only in a single plan. Such trusses are mostly used as structural members for roof of a building or a bridge deck. One of the biggest benefits of using such a truss is that it has considerably low weight and more strength as compared with a solid beam or girder. It would be more economical to have such a truss.

Liked the article? Support us Please!
Do support us by following us on social media platform. Let’s grow together and share our experiences as a construction professionals and civil engineers.

The depth or height of the truss is decided depending on the length of given span but again the design is adjusted to optimize the material in the chords of the truss.

You can easily understand this classification of truss by imagining about the electrical power transmission tower. So, a space truss is that which is in three-dimensional framework of members hinged at the nodes. For above example, a tetrahedron shape of space truss is used that has 6 individual members with 2 members in common with adjacent trusses.

Pratt truss is the simples and most-economical of all trusses. The configuration is pretty simple and is easier to build. In a typical truss, the members are placed vertical at distance, jointed with one diagonal member and two horizontal members at the top and bottom.  The vertical members take the compression while the diagonal members are in tension. Pratt truss is ideal for building with span between 20 to 100 members.

A typical warren truss, diagonal members are arranged alternatively to create a shape of “W”. In such a truss there are equilateral triangles with each alternating diagonal member in tension and compression.  In comparison to a Pratt truss, this type of truss requires lesser number of members and can be used for buildings with span of 20 to 100 meters.

Fink truss was originated as a bridge truss initially but now it is one of the most common truss used in residential or building construction. This type of truss is suitable for shorter spans and because of shorter members and chords, it is highly economical to use.

Fink truss are used for medium-sized homes but a king post truss is only suitable for small houses with span of about 8 meters. It is fabricated with a triangular truss and a cross beam that acts as a tie beam. Another modification of King Post truss is multiple king truss.

A queen post can be used for a comparatively bigger span of about 10 meters in comparison to king post. Queen post itself is a tension member that uses two vertical posts joined with a beam in compression at the center node.

It’s a bridge truss that is composed of chords, verticals, and diagonals. The vertical members of a Howe truss are in tension while the diagonal ones are in compression. The truss is named after the inventor of this truss, who is William Howe. The truss had been a popular option for bridges in 1800s.

North-light truss is used in combination traditionally for short span industrial buildings. This type of truss can allow the designer to leave room for natural lighting wherein glazing can be used on the north-east or north face of the building.

The concept of the truss is not new. The Egyptians used rope trusses for the support of their ship sails. A simple triangular truss has been used in bicycles. Just look at the diamond-shape bicycle frame. It comprises of two connected triangles that act as a simple truss.

The modern day trusses are made of steel sections or beams. They are I-sections, T-section, Tube-sections, square, and channel sections. Mostly I-section is used. Here’re some of the most common applications of trusses in practical life. 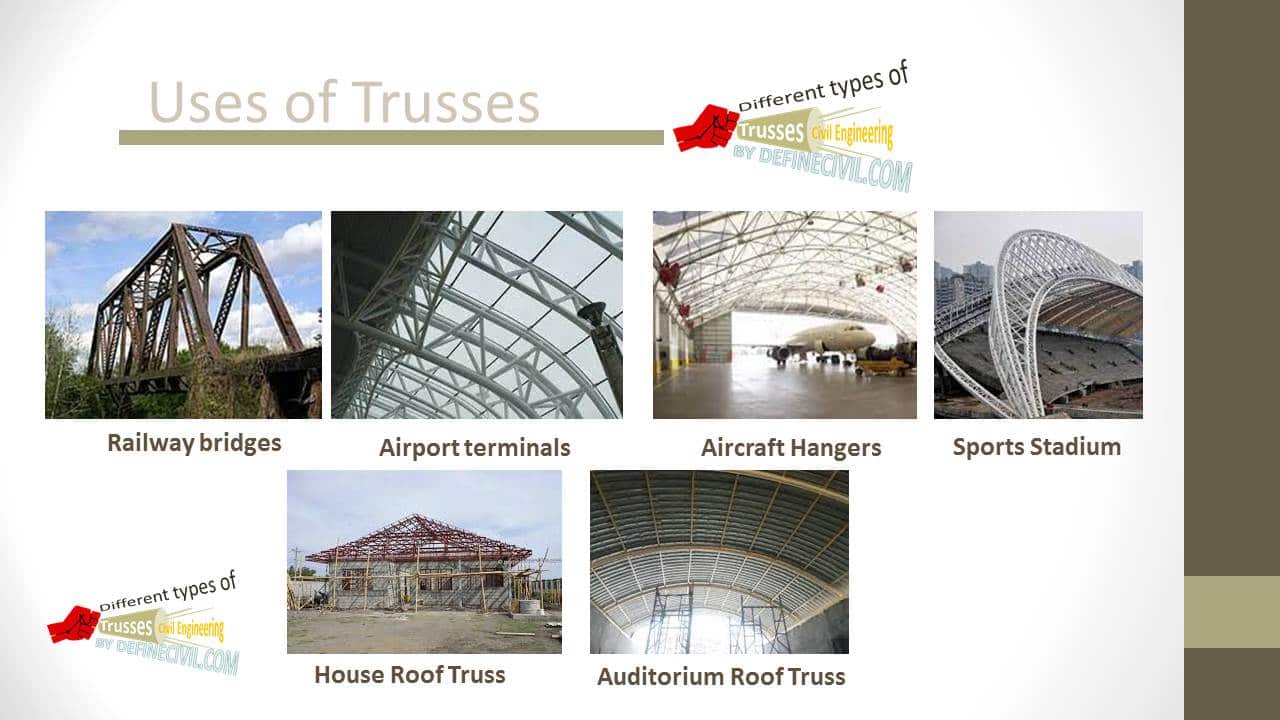 Engineers design trusses based on certain assumptions as under:

He is a professional civil engineer with over 5+ years of work in mega construction projects. He's been on the internet community for quite some time now. He is a passionate blogger and a construction geek. You can get in touch with him via the contact us page.