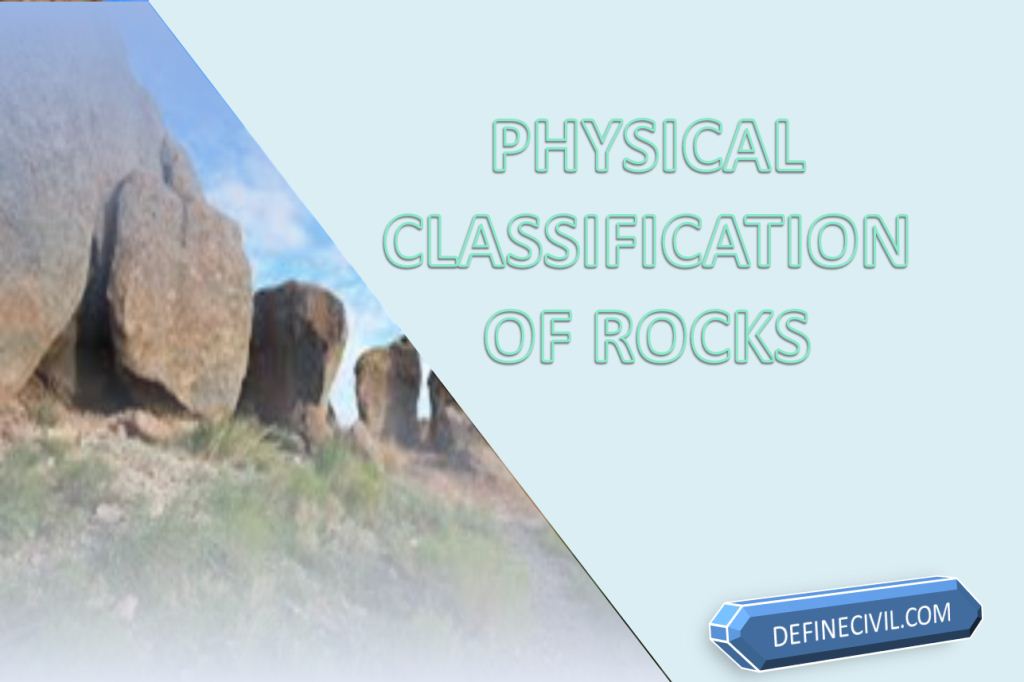 So you are actually looking for details on physical classification of rocks and are unable to find some resourceful and in-depth guide. Don’t worry here I am with another useful guide exploring different types of rocks based on its physical appearances and its classification based on how it looks.

There are actually three common classifications of rocks

From structural composition of the rocks, there are three broad classes of rocks :-

Interesting for You
Have you heard about the hydrovac excavation? It is actually a new technique for excavation that is more environmental friendly and would save time. Read about it here Hydrovac Excavation

As the name suggests this class of rocks never shows distinct layers in their structure beside have a compact massive crystalline structure; that’s why un-stratified rocks are usually called as massive rocks. As they are intact in massive units they can’t be separated easily in layers or slabs.

The most common examples of these types of rocks include granite, trap etc.

Granite is a light-colored igneous rock with grains large enough to be visible with the unaided eye. It forms from the slow crystallization of magma below Earth’s surface. Granite is composed mainly of quartz and feldspar with minor amounts of mica, amphiboles, and other minerals.

Trap rock is a name used in the construction industry for any dark-colored igneous rock that is used to produce crushed stone. Basalt, gabbro, diabase, and peridotite are the most common rock types referred to as trap rock.

Quartzite is a metamorphic rock formed when quartz-rich sandstone or chert has been exposed to high temperatures and pressures.

Basalt is a common gray to black volcanic rock. It is usually fine-grained due to rapid cooling of lava on the Earth’s surface.

Stratified rocks are opposite of unstratified physical class of rocks. Stratified rocks are composed of layered structures that are connected as a result of stratification and possess plane of cleavage or cleavage planes or bedding planes. These layers and stratum can be easily detached from one another along that plane.  The layers of the stratified rocks can be as thin as 1 cm and can be as thick as 1 meter or above. The color, size and composition of the layers can be similar or different in nature.

Most common example for this class of rocks include:-

Sandstone is a sedimentary rock composed mostly of quartz sand, but it can also contain significant amounts of feldspar, and sometimes silt and clay.

Limestone is a sedimentary rock composed mostly of the mineral calcite and comprising about 15% of the Earth’s sedimentary crust. It is a basic building.

This classification of rocks is very common in case of metamorphic grout of rocks. Foliated rocks are formed in a layered structure that has been induced under lateral pressure. These rocks have a tendency of splitting along a plane of definite direction only which is not necessarily be in parallel direction to each other, which was the case of stratified rocks.

The best examples of the foliated rocks include

Gneiss is a high grade metamorphic rock, meaning that it has been subjected to higher temperatures and pressures than schist. It is formed by the metamorphosis of granite, or sedimentary rock. Gneiss displays distinct foliation, representing alternating layers composed of different minerals.

So, In this post I have shared with you the broad physical classification of rocks and have explained some of the most common examples of these types. I hope you enjoyed the post please do share it.

Wait…. Here is a power point presentation for you to save in your mobile or laptop for reference in future. It is in pptx format you can download for free.

Click the button below its a google drive link.