Rutting in flexible pavement is creation of a depression or a groove. It is typically shown as wheel path engraved on the road surface. The main cause of rutting failure is the deformation of the asphalt concrete under the loading from vehicles. In cold climate areas, rutting happens as snow studded tires travel in a path creating a groove on the surface.

Rutting in road is a common problem. Despite its obvious dangers, it can be repaired to avoid further damage. It is also possible to repair rutted roads by enhancing subbase. If the rutted road is paved with asphalt, it can be resurfaced without sacrificing its structural integrity. However, while a patched road is an improvement, it is not an easy process.

The term rutting of aspahlt is used in civil engineering to express permanent deformation or consolidation that accumulates in asphalt pavements overtime. You can visualize the shape or rutting by comparing a vehicle moving on dirt road. It leaves its path along travel of wheels. Anyhow, rutting failure in flexible pavement is not because of the vehicles on the road. Instead, it happens because of structural incompetence.

Causes of rutting asphalt and its prevention

Rutting is not just an annoyance for the road users but can also cause safety concerns. So, it is important to learn the causes of rutting on roads.

Anyhow, rutting is more possible on roads that lack compaction, have insufficient thickness of layers, and has weak asphalt mixtures. So, IDOT requires pavement designers to construct asphalt roads as per the specifications to prevent rutting and other road distresses. The specification also deals with the quality of execution of work. It regulates the way of asphalt rolling, the thickness of the base, the amount of aggregate in the hot-mix asphalt (HMA).

Sometimes the rutting happens as a result of seasonal changes. During summers, the flexible asphalt road starts losing binder content. The asphaltic binder begins to stick to the bottom of the tyres disturbing the matrix. This allows the aggregate and binder in asphalt to move sideways. Some studies suggest that if rutting is a problem, stabilization is necessary. But, even if stabilization is successful, it may not be enough to prevent reoccurrences.

Another cause of rutting on flexible pavement is improper compaction. The use of bad quality and non-saturated material in the pavement structure doesn’t perform well under loading. If during construction, the compaction has not been achieved as per specification requirement the subgrade may settle resulting in ruts.

Therefore, in road construction, engineers always recommend evaluation of compaction with Field Density Tests (FDT). Quality inspectors use different methods of FDT to check the degree of compaction. They compare the on-site inspection with the maximum dry density (MDD) done in laboratory by Proctor Tests.

So, if the material is not stiff it would be unable to spread the load better. So, if the subgrade is unstable, rutting will occur. 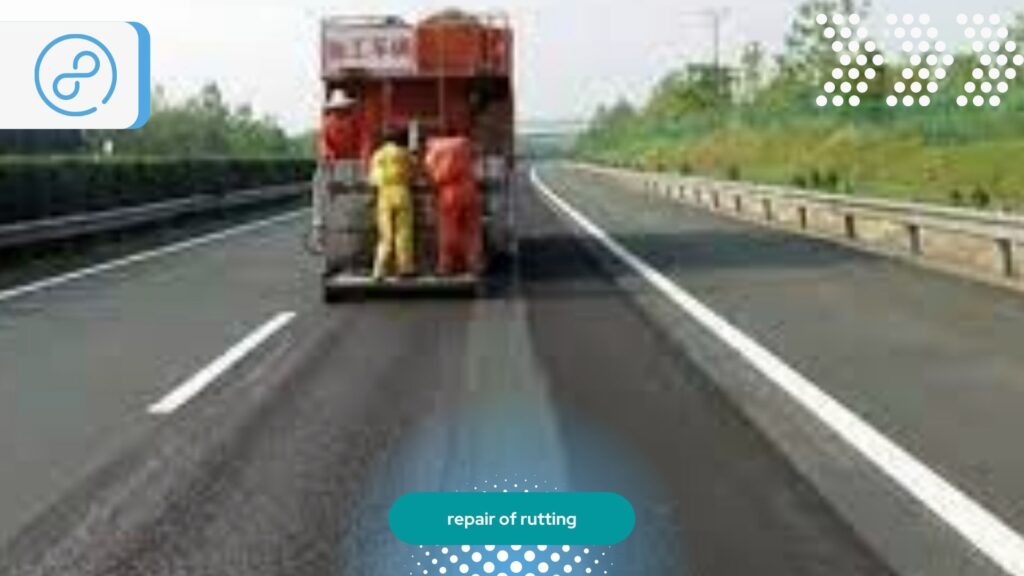 Improper thickness of base material

IDOT specifications require adequate thickness of the subbase material. A road is more prone to rutting if the subbase thickness is not adequate or the compaction is not proper. A soft subbase allows the material to be depressed under loading.

Poor mix also results in rutting of asphalt roads. A mix that lacks internal strength can’t resist permanent deforming under the loading of vehicles. But rutting doesn’t normally happen at once under the load. It takes place when number of vehicles repeatedly moves over the effected or weak patch. Such a mix, pushes along the sides of the tire upon loading.

For such, engineers recommend use of more aggregate – particularly fine aggregates. Once added, they can increase the friction among the asphalt matrix resulting in high quality bond. You can also use angular aggregates to prevent rutting.

The use of excess asphalt in the mix design can also results in rutting. Therefore, it is important to strictly follow the mix design during the preparation of asphaltic concrete in the asphalt plant. Also proper rolling of the asphalt helps in high quality coating of the aggregate enhancing the bond.

Use of stiff asphalt binder

Depending on the cause of rutting, we can classify the issue in three different categories. The division in different types will help us in understanding the root cause and the probable remedy.

Impact of rutting on roads

How to repair rutting in pavement

However, the best method to reduce chances of rutting occurrence is by strong and stiffer subbase. The subbase plays an important role in the road system supporting the road structure. Therefore, civil engineers should strictly follow procedure of IDOT for design and construction process.

If the rutting is local and confined, it can be ignored. But if rutting is heavy, you must investigate the root cause of pavement failure. For deeper ruts, you can level or overlay the patch.

While so many cause of rutting, it can still be prevented with good construction practices and avoiding settlement. Even though we have got innovative compaction technology at hand, rutting is still a challenge for transportation engineers. Therefore, it is a dire need to improve industry standards and ensure quality control.

In addition to rutting, pavements may be susceptible to other types of wear and tear. For example, gravel roads are susceptible to gravel loss. In addition, road surface cracks can reduce the life of the road, which increases maintenance costs. Consequently, rutting on roads can also lead to permanent deformation. Further, it can lead to uneven pavements. But, in most cases, a simple patch can prevent the damage, while a new one may be necessary.