Soundness test of cement by Le-Chatelier apparatus is very easy but very important test along with many other quality tests on cement.

Before going to the exact details, procedure and calculations of soundness test of cement by Le-Chatelier apparatus, let’s first discuss about the overview of soundness.

A sound cement doesn’t undergo volumetric changes i.e. expansion or contraction during its conversion from plastic paste state to a hardened state.

As an engineer what behavior do you expect from a structure that swells when gets hardened?

Have ever you heard or witnessed water supply lines being blown out in winters due to icing of waters therein? So if you answer to above questions you would know how destructive the unsoundness is.

The word soundness has a meaning of reliability and trustworthiness so in a rigid construction material like concrete; the soundness is an imperative property.

[su_box]The apparatus was named after a French chemist who invented this principle named Henry Louis Le Chatelier who was an expert chemist.[/su_box] 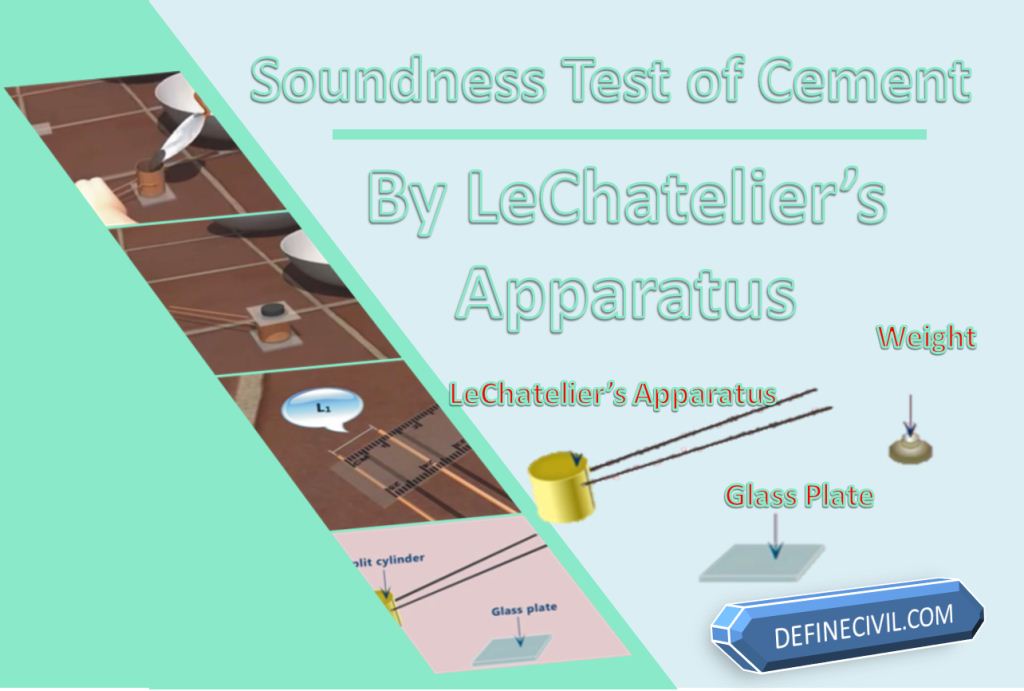 Significance of Soundness Test of Cement

In terms of Portland cement, according to Portland Cement Association (PCA), “soundness” is the ability of the cement to withstand any change in volume after setting and hardening.

In simple words sound cement is the one that does not changes its volume much after it gets hardened. The excess lime or magnesia content in cement that produces free CaO and MgO are said to be responsible for the unsoundness.

Beside this some other factors that can cause unsoundness in cement is improper or inadequate burning and grinding in kiln, poor original composition, excess of sulfate or magnesia and a very fine size.

Beside other ingredients of cement like Magnesia, Iron Oxide, Silica, Alumina and alkaline; lime is the main ingredient constituting about 70% of cement. If lesser lime is used in the cement than it would set quicker but excess of it would cause unsoundness.

If the soundness of the cement is not tested and there is an appreciable change in volume of mortar after setting that it will cause cracks in the concrete body and had severe impact on the structure due to which the durability of structure would be uncertain.

Overview of the Test

The apparatus used for the testing of soundness of cement is known as Le-Chatelier apparatus. The apparatus should be in accordance with the IS:5514 which is standardized by Bureau of Indian Standards (BIS) published in 1996.

The standard procedure that is followed in the laboratory is standardized as per IS: 4031 (part-3) – 1988. Although there are two methods for calculating the soundness of cement :-

But in this post I would only talk about the Le-Chatelier Method as it is the most common method and is widely used in the field and projects.

Le Chatelier Apparatus which is the major tool that would be used for this test is composed of a split metal cylinder having clear internal dia of 30 mm (1.2 in) and same height while the thickness of wall is 0.5 mm. \

On both the cylinders of Le Chatelier apparatus for determination of soundness of cement; two indicating needles called indicator arms are fixed with length of 165 mm (6.5 in) which are actually used to determine the change in volume.

Beside Le Chatelier apparatus the equipment required is as follows:-

Must Read: Properties of Hardened Concrete

The distances noted in the procedures for the Le-Chatellier’s apparatus is just subtracted to get the soundness index of the cement.

D2 = Measurement or distance between indicating needles after 3 hours of immersion in a water at boiling temperature.

As we know that the lime present in cement combines with water while the remaining free lime and magnesia have increased volume causing unsoundness in cement. So we want to test the cement for the worst case so that’s why 78% water is taken instead of 100 percent.

Well, if the value of the expansion is more than allowed; you must not use that cement in your project as that would cause excessive destructive expansion which will compromise the structural integrity.

There are actually many reasons for cracks, as I have explained that expansion is one of many reasons. You must investigate your cracked structure and monitor the cracks before arriving at a conclusion. The cracks could be because of

According to ASTM C151 / C151-8 is the standard for the autoclave expansion test of the hydraulic cement.

Watch this amazing video I have made explaining every thing about this test.