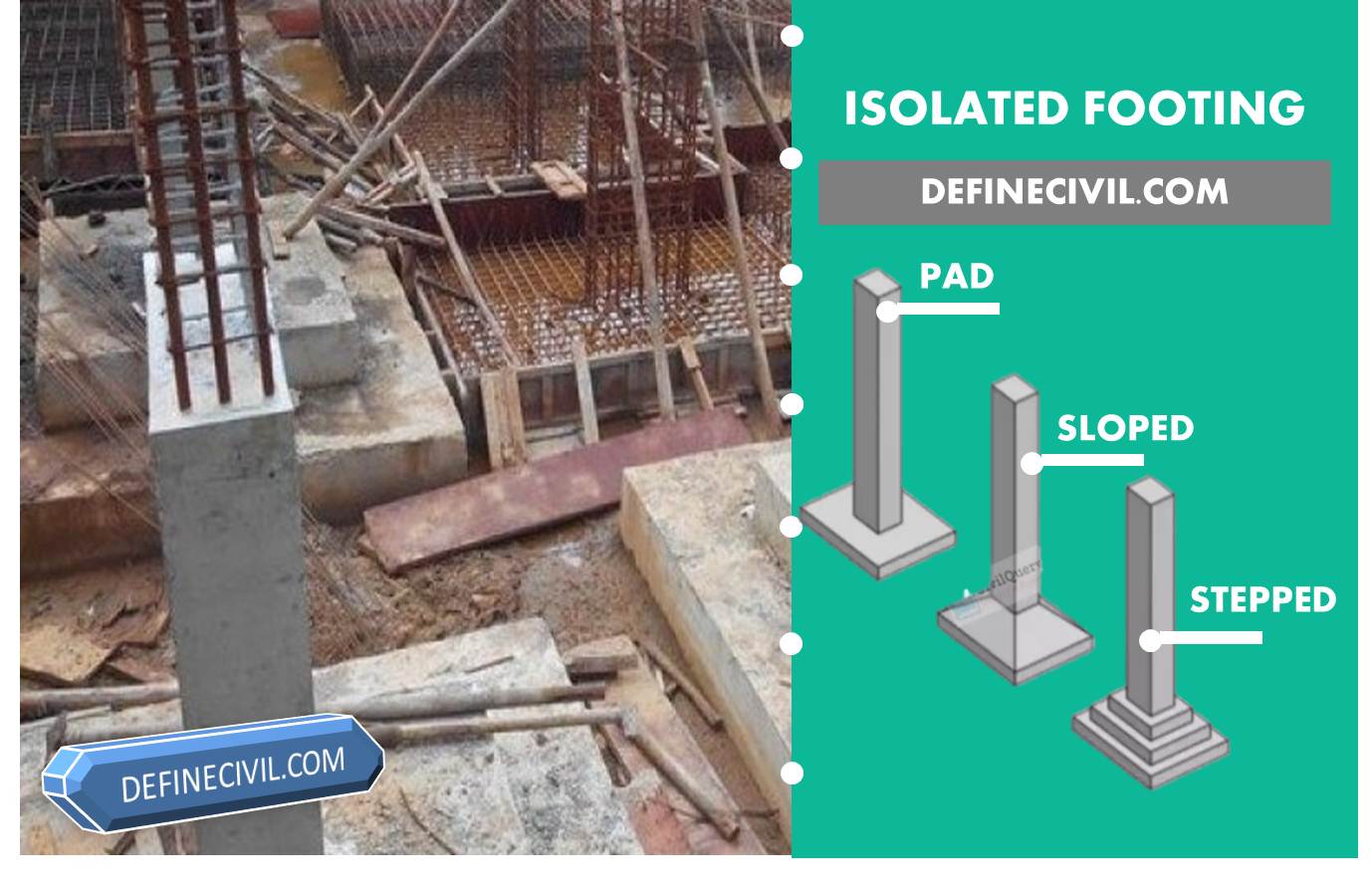 Isolated footing transmits the load of a single column to the underneath soil. It is also termed as spread footing because it spreads the concentrated load on the column to on a wider soil area so that stress intensity is reduced.

Take Note
Isolated footing is defined as a type of shallow footing that transmits the load of a single column to the underneath soil.

Isolated footings are only provided when it is absolutely certain that there would be no varying settlement keeping in view the bearing capacity of the soil under the required design load. Isolated footing should not be used when a bearing of widespread loads is required. In such cases either strip footing or mat or raft footing should be provided.

For the design of isolated footing, one must know the column load and moment to be transferred and allowable bearing soil pressure or bearing capacity should in known in terms of KN/m2. Based on the grade of concrete and steel; the footing is designed. The geotechnical design includes the size of footing as well as depth of the footing based on the inputs. Whereas, the structural design of isolated footing gives you the reinforcement requirement.

The main and distribution reinforcement are provided at suitable distances while the anchors for the column are embedded in the footing pad with appropriate development length. This gives column and footing a monolithic connection or fixed restraint against vertical load and bending moment.

For specialized cases, soil characteristics, and loading conditions; the isolated footing can be combined either in rectangular and trapezoidal shape in plan such footings are called combined footings.  For property constraints sometimes the columns have to be tied specially to cater eccentricity of loadings and for that a strap beam is provided connecting the two isolated footings. Such a type of footing is called a strap beam.

Clear cover to the reinforcement is very critical in case of foundations. In areas where the underground water is way below the footing depth a clear cover of 50 mm is enough. However, for soils where ground water movement is shallow and seepage is also there the clear cover should be more than 75 mm.

Isolated footing bends in a dish shaped form and to resist such effect reinforcement mesh is provided to resist internal shear forces and bending moment.

Actually isolated footings have to components – a slab and a pedestal. The slab can have uniform or non-uniform thickness across the depth. Keeping in view the uniformity of the slab thickness there are three types of isolated footings.

The simplest and most common type of isolated footing is pad footing. It includes a slab of uniform thickness throughout the depth.

The stepped and sloped footing is actually used in situations where there is a chance of punching shear failure so the end connection of the column with the footing is strengthened. In stepped footing, two or three steps are provided that are monolithic with the footing.

The slab can also have different shapes in plan but it entirely depends on your loading conditions, architectural preferences, and other various design inputs.

Square footing includes reinforcement in both direction to resist shear forces and bending moment. An effective depth value among the footing in two directions is only minor and can be neglected.

Circular footing is not that common these days and is only used in special cases.

The biggest advantage of isolated footing is economy. It is cost effective than all other types of footing, as it involves minimum usage of construction materials i.e. concrete and reinforcement. It is easy to make and doesn’t require very heavy duty excavation as in case of raft foundation.