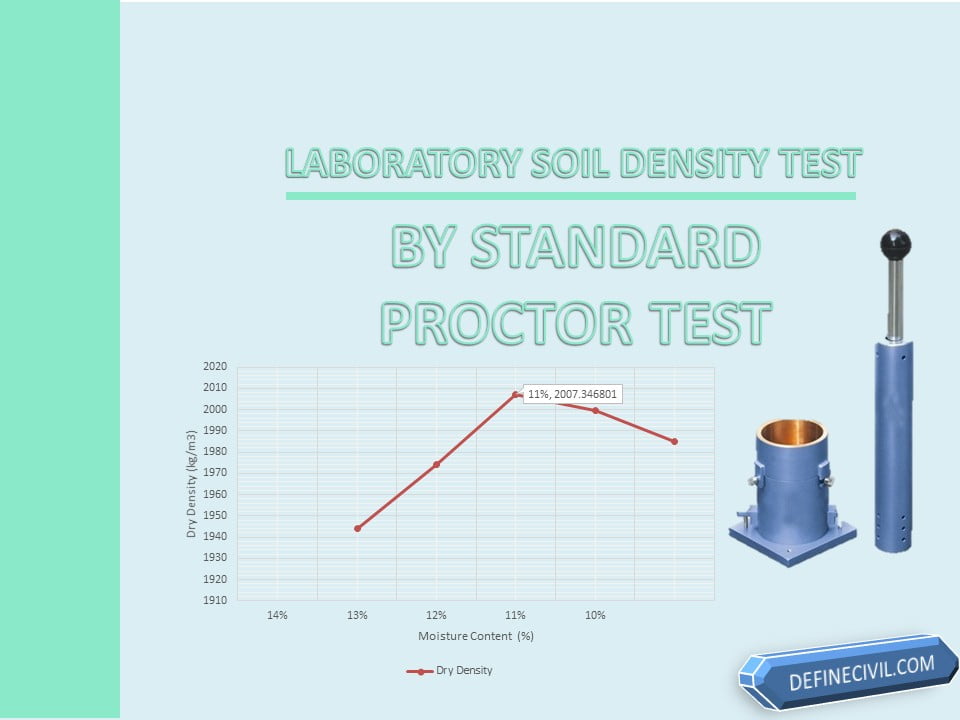 Maximum dry Density of soil is determined in the laboratory with the help of Standard Proctor Test standardized by ASTM D698 and AASHTO T99.

So this read explains in depth, the significance, background, apparatus and procedure of the standard proctor test.

It is worth mentioning, that densification or compaction of soil at site is generally carried out with the help of roller compactors.

The improvement and enhancement of soil by compaction is mandatory in building, highway and airport runways projects. The bearing strength of the soil and thereby shear resistance lies heavily on its compaction. It decreases the permeability and prevents settlement of the soil. It reduces the void ratio and thus the damage from frost could be perverted or heaving whatever.

For clayey / cohesive soils, sheep foot rollers are used for producing a kneading effect resulting in compaction and densification.

We know a soil matrix has three basic components:

These soil solids are arranged in a way that voids or capillaries are produced within it. The objective of compaction and densification is to re-organize soil matrix in a way that less voids are there reducing the volume of the soil and thereby increasing the overall density.

The method of compaction described above i.e. with rollers is termed as mechanical compaction or mechanical stabilization. It can be static or vibrating one depending on the type of stress applied.

DID YOU KNOW?
What is the difference between compaction and consolidation of soil? Compaction is actually a broader term and is carried out with the help of rollers or compactors. In compaction the soil solids are rearranged in a denser arrangement eliminating the voids and air in it. In consolidation, the soil is compressed thereby expelling the water from the voids. In compaction, the water is added in appropriate proportion which increases the density.

Why to Perform Standard Proctor Test?

In order to evaluate the degree of compaction achieved at site, the field density carried out by field density test sand replacement method or any other method, is compared with the laboratory density determined by standard proctor test or modified proctor test.

Standard proctor test or proctor compaction test was the original test devised by an American engineer Ralph R. Proctor showing that for a given compaction effort, the density of soil depends on the type of soil and moisture content.

We know that the conditions of site and that of the laboratory are different altogether. The lab provides an enclosed and controlled environment where soil is compacted manually in small quantity. Whereas, in field the soil is compacted in bulk and there are some many other factors that dive in creating a unique and uncertain situation.

According to R. R. Proctor the compaction of soils depends on following factors: –

As I have explained above that the method of compaction for gravely soil is different than that of cohesive soils. In clayey soils, the strength of soil is mainly because of adhesion of soil solids while in gravely soils the strength is due to friction between soil solids. In composite well graded soils, both the factors affect the compaction degree.

So it is without a doubt that the nature of soil including its grading, plasticity would be dictating the degree of compaction.

Water, when added to the soil matrix lubricates the soil solids thereby easing their rearrangement and restructuring. So after addition of water, when soil is compacted, the soil particles are easily re-arranged and a denser arrangement is formed.

If the water is added beyond optimum water content, it starts replacing the soil solids thereby reducing the density.

Compaction effort means the type of method used for soil compaction. It includes, the number of passes, type of stresses i.e. static, vibratory or dynamic and weight of the roller.

Now that I have explained the basics of soil compaction and background of the standard proctor test, so let’s move on to the procedure.

Standard proctor test is carried out to

The one-liner of the test is, that soil is mixed with increased moisture content and with the help of proctor apparatus the weight of soil and thus density, in standard cylinder of known volume, is determined.

The standard compaction mold used is a metal cylinder with detachable base plate and a collar of 2 inches thickness. The height of mold is 4.585 inches. Two sizes of molds are used either of 4 inches internal diameter or 6 inches.

Standard compacting rammer of 5.5 lbs weight is used such that having a height-of-fall of about 12 inches.

W1 = weight of the empty standard proctor mold + base plate

Dm = diameter of the mold

Hm = height of the mold

Repeat the above calculation to determine the dry density for number of moisture contents at least 3 to 4 times so that the graph can be plotted.

Take moisture content on abscissa and dry density on ordinate, plot the points on a graph as a curvilinear relationship. Match the plotting points with a free hand curve and determine the optimum moisture content corresponding with that of the maximum dry density.

Show the graph and write down the values of Optimum Moisture Content (OMC) and along with that note down the maximum dry density (MDD).

Wait! Its Not yet Over

Yes Dear, Its not yet over. Because I have made a ready to use excel sheet for you to just put in values of standard proctor test and it will automatically calculate the optimum moisture content and the maximum dry density along with plotting of graph. You can download this excel file for standard proctor test by clicking the button below.

If ever you have finding difficulty in plotting the curve between Dry Density and Moisture Content than this explainer video is for you. Watch and learn.