Both impact the workability and strength of concrete. So, one must also know how to avoid segregation and bleeding in concrete.

Segregation generally happens when the fall of concrete pouring is excessive whereas bleeding occurs when excessive water is added or as a result of over vibration during concrete compaction.

But that’s not all, there’re so many other distinct features or patterns that must be understood well before going for concrete pouring.

We know concrete is an amalgam of different ingredients. It comprises of a cement, sand, aggregate, and water. But to achieve proper compressive strength and for high quality, all these ingredients must have to form a homogeneous matrix.

If you use only gravel and don’t have sand in concrete, there’ll be large amount of voids. This will significantly reduce the compressive strength of concrete. So, we need to make sure; the cement slurry binds well the all the concrete ingredients. 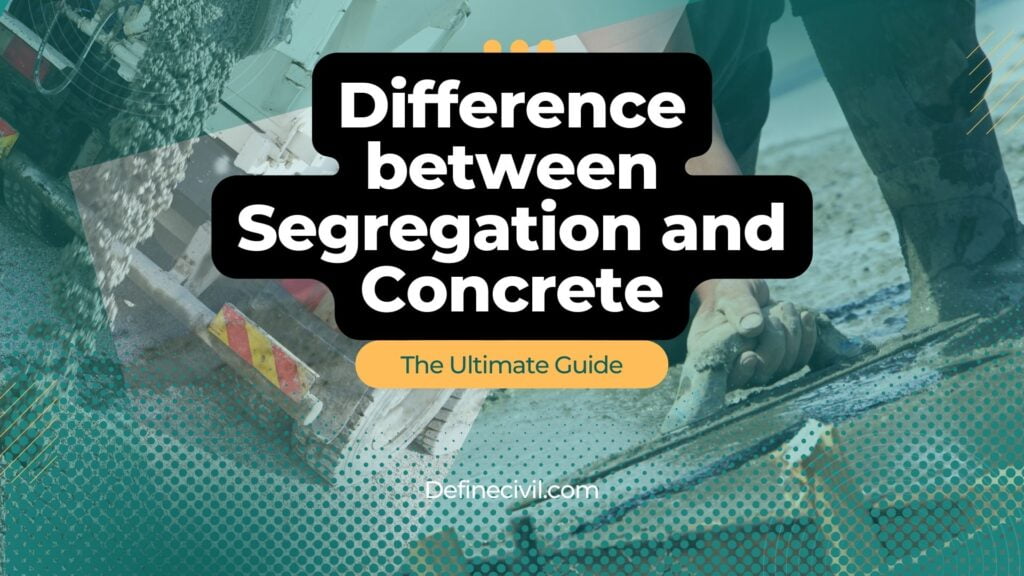 As a result of segregation, the concrete mix no longer behaves as a homogeneous mix. Most of the reasons of segregation are relevant to handling, transportation, and placing of concrete. Another basic cause of segregation is excessive slump or loose slump. Also falling concrete from a far height results in segregation.

According to some codes like ACI, the maximum fall for concrete height is 1.5 meters. The recommended range for concrete pour is 3 to 5 feet or (0.9 to 1.5 meters). But depending on the slump of the pour, the limit may be as little as 2 feet or 0.6 meters.

We normally undergo concrete mixing by hand or by machine. Hand mixing is only preferred when doing small-scale projects like in concrete driveways or a flooring in small portion. Poor mixing of concrete can not only result in understrength structures but can also impact the quality of structure for long term. 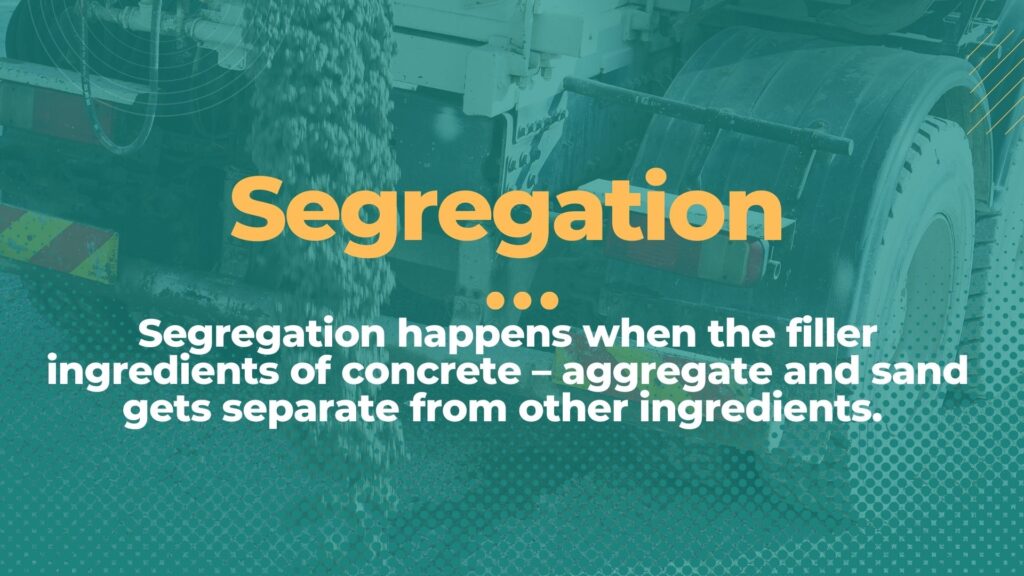 If you’re pouring concrete without working yourself to avoid segregation; you may put yourself in hassles like:

Also Read: Concrete Leveling – Everything you need to know [7 FAQ]

How to avoid segregation?

Experts recommend using chutes while pouring concrete. You’ve got to allow transit mixer to come as close to pour as possible. But that’s not always possible. For such, you can use chutes to avoid segregation.

Also Read: Compaction of Concrete – Importance – Under –  Over vibration – PDF

Always use recommended size of coarse aggregate in concrete. These aggregates are larger than 4.75 mm (retained on a No. 4 sieve). But the gradation of aggregates must relate well with the compressive strength requirement of concrete.

When water escapes the concrete matrix and start rising to the surface in the shape of white foamy cement slurry; this is known as bleeding. Cement and water mix up result in hydration reaction during setting. But if you add excessive water during mixing of concrete ingredient, it will rise up to the surface.

The aggregates, cement, and sand has some ability to take water so if you add excess water, it will leave it resulting in bleeding.

The excess water will take most of the cement past and deprive the aggregates from cementitious material. The same process happens when we undergo over vibration during concrete compaction.

The water slurry on the top of concrete will eventually evaporate leaving behind exposed aggregates and resulting in drying shrinkage cracks.

Effects and tricks to avoid bleeding

I’ve summarized the above information, for you to save it somewhere for future reference:

Also Read: Can You Pour Concrete in rain? (Steps and precautions)

Segregation is the separation of filler ingredients of concrete whereas bleeding is the rising of cement slurry to top of the concrete pour.