So, you want to choose a type of column for your next project but are not sure what type is best for your structure. Well, if you look at different types of buildings in your surrounding, you’ll find a vertical supporting element that transmits the load from the super-structure to the underneath foundation. Such a vertical member that takes compressive loading is known as a column.

As a civil engineer or an architect, it is crucial to understand different types of columns, their purpose, qualities, and features.

While the construction of buildings is the responsibility of many different people, most buildings actually include one or more types of column. These types of columns are commonly found in the grand old Victorian era buildings that are just starting to fall out of favor and are slowly being replaced by new modern age constructions that are much more modern in appearance.

So, here’s our take on different types of columns with detail guide on each type.

What is a column in building?

Column is an important component of a building. We can define column in a building construction as:

A vertical member, having 3 times greater effective length than its least lateral dimensions and carrying the compressive loads are called columns.

Columns are structural members and are provided to carry load from the beams and slabs or upper component of structure, transmits the load to the slabs, footings, or foundations and then to the soil. Typically, columns carry axial (vertical) loading and is designed to resist compressive loading.

But, with the time and advancements in studies different failure modes were analyzed. So, later on designers start considering other loading like snow, wind, seismic, and other horizontal forces that can cause bending in columns and hence fail the entire structure.

Columns can be of any construction material. Designers use concrete, reinforced concrete, timber, and bricks. If we look at the history of columns, we’ll come to know that ancient Egyptians were used to construct columns of stone for as early as 2600 BC.

Types of columns in construction

There are different types of the columns classified on the basis like:

Columns are structural members and an important component of a building. According to the shapes most recommended and suitable type of columns are square columns and rectangular columns. Here’s the reason:

Despite all the reasons, there are some other types of the columns used in the construction as the concrete is easily molded in any required shape. All the shapes are listed and described below:

These types of the columns are the most common of all other types. Rectangular or square both types of columns are easy to construct and shuttering is easily available. They offer better shape to the building and are cheaper to construct than circular or other shaped columns. The labor doesn’t need some fancy skills to construct square or rectangular columns. 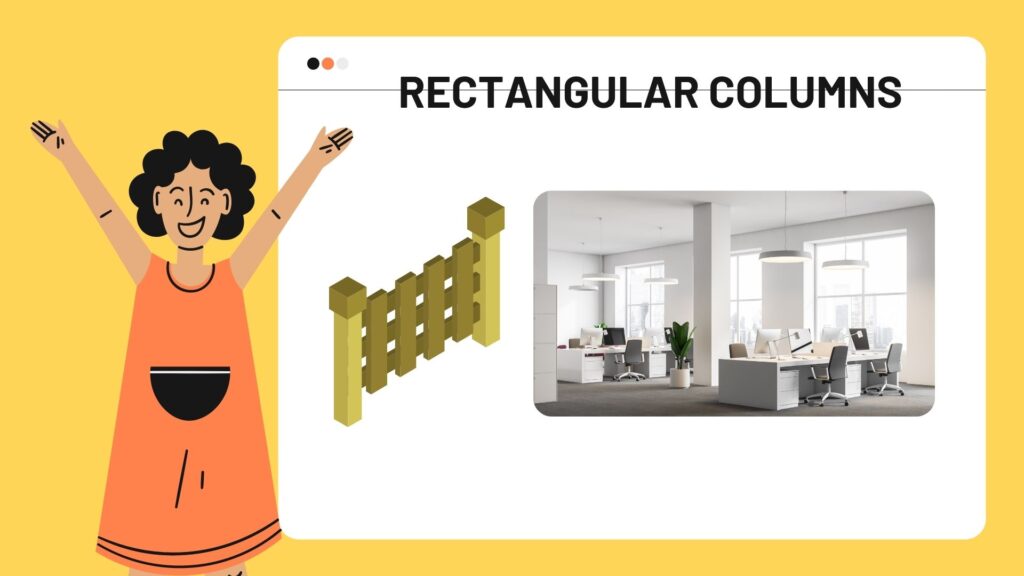 These are specially designed columns mostly used in piers of the bridges and in buildings where architectural requirement fits. They’re also used as pile foundation in bridges and buildings. Circular types of the column are preferred when you need to avoid edges. Architects prefer circular columns in fancy designs of large structures like auditorium or public buildings.  Circular columns do not hinder in passage and provide clean better look of the structure.

These types of columns are mostly used in the corners of the boundary walls. These are used for same purposes as the square and rectangle column. Designers prefer this type of column in special scenarios like in turning of the metro rail or for the turning in fly over construction.

T- shaped column are same like square or rectangular columns. They take the loads of the deck of bridges and transfer it to the pile cap or pile foundation. They are also used in the retaining wall construction in inverse T shaped to retain the soil mass.

Y-shaped columns are used in flyover and in bridges. Arch type column are used where loading is heavier and you need to offer wider deck area on the top. These types of columns are often referred to as transoms in bridge and flyover construction. The thin cylindrical part at the base of the column provide added space to allow traffic movement or green area as median for the road or highway.

Based on type of reinforcement

In Spiral columns, the main longitudinal reinforcement of column is wrapped by continuous cylindrical and helical bars along the length. This type of reinforcement is mainly provided to support the loading in the transverse direction. Spiral columns withstand much more loads than tied column. These columns allow more toughness, ductility, and reduced eccentricity.

Also Read: How much does #8 rebar weight per foot [SOLVED]

A composite column, as the name suggests, is comprised of two or construction materials blended together. The most common combo for such columns is that of structural steel and concrete. Usually, it is reinforced with longitudinal and spiral reinforcement simultaneously. These types of columns are widely used in truss structures for avoiding the corrosion in the structural steel.

The loading pattern in the column is an important concept for civil engineering students to  help them understand the failure types in the columns. Mainly columns are axially loaded but different studies had proven that columns do carry some other loads. Hence, on the basis of loading pattern, the following types of columns are listed and described as;

If the load is acting on the column exactly at the center of gravity of the columns cross-section, the column is referred to as axially loaded column.

However, it seems an impractical thing, as the load on column acting exactly on the center of section is an ideal condition. But, some of the interior columns of multi-story buildings with symmetrical loadings can be axially loaded columns.

It is quite possible that load acting on the column is compressive load but it acts with some eccentricity. By eccentricity, it means the load acts slightly left or right of the line of center of gravity. This eccentricity causes moment in the column. In such a case, there are following types of eccentrically loaded columns:

If the load acts on the one axis in the column section along x or y axis such that only moment exists due to eccentricity along x or y, the column is called as uniaxially loaded column.

When the load is acting outside the axis of column section x or y the moment due to such eccentricity exits along both x and y directions the columns are called as bi-axially loaded column.

These types of loading are mostly in the corner column of the buildings.

Based on slenderness ratio

It is the ratio of the effective length of the column to the least radius of gyration along x or y axis of the column section, derived from the Euler’s formula for finding the design load on the column as,

L = effective length of the column as shown in figure 13

r = least radius of gyration along x or y axis

If the ratio of the slenderness ratio exceeds 45 and ratio of effective length to the lateral dimension exceeds from 13.6, the column is said to be long column. Long columns mostly fail in buckling unless an intermediate bracing or support is provided.

Based on Construction Materials

When it comes to the materials that are used to build these columns, there is a wide variety. For example, some of these columns might be built using masonry. This means that the concrete that is used to construct the column is actually cast into shape. Other types of column might be made out of wood. These can either be a simple column made of a single piece of wood or they could be a double beam type of construction that is supported by two different beams.

Remodeling or replace a columns