A tie beam is a structural beam that connects two columns at any height higher than the floor. The term “tie”, which refers to its purpose, is used to connect two columns or other structures. Tie beams can be used to reduce the effective length of columns and to decrease their slenderness ratio. 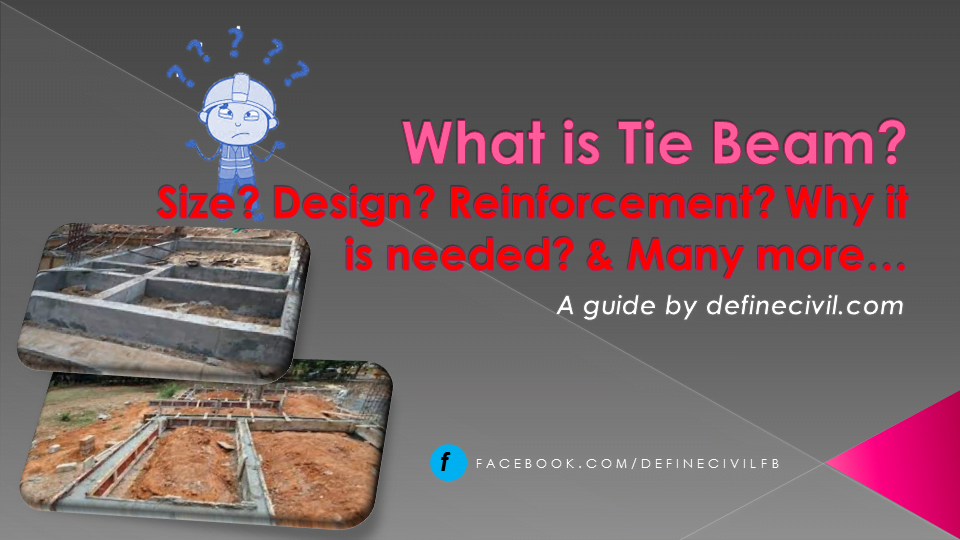 What is a tie beam?

Tie beam is a beam that connects roof trusses to two or more columns, rafters, or at any height above ground level to make the entire structure more rigid and stable at the foundation. Tie beams are usually located at the roof truss, floor level and a plinth. They are not able to support any vertical loads such as walls, etc.

Sometimes, the strap beam is used as a tie beam to take all stresses caused by column eccentricity in eccentric footing. To reduce the column’s unsupported length, tie beams can be used as fixing or tying members.

Tie beams are also useful for supporting walls and other partitions. They are like tie elements to protect differential settlement between foundations depending on the soil strata.

In structures, a tie can be a name of any element that resists tension. It can be a strap or tie rod, wires, suspension cables, or ropes. It is opposite of what we call as a strut. A strut resists compression whereas tie resists tension. Any tension-resisting material can be used to make ties.

The tie beams are designed to carry the superimposed load of the walls either brick or blocks above and also the different settlement load of the building.

The term “tie beam”, “grade beam”, ground beam, and “pillow beam” are all the same. A Tie beam is a beam that ties two columns to resist two movements, either vertically or horizontally.

You can have tie beams at any height. Plinth beams are those that are located at the plinth level. They help in soil retention and provide support for walls.

The amount of differential settlement in the foundation chosen for the job will determine the design of the tie beam.

If delta is the differential settlement then it will distribute this moment among beam-column members according to their flexural stiffness.

A tie beam is usually recommended for a column when its height is more than 4 to 5 meters. However, the designer must keep in check the bending length of the column to make them non slender.

Have you ever thought why the foot-rest is provided in a chair? It is actually meant to tie the four legs of the chair so as to reduce the opening or the dispatching force within the legs of the chair.

Have your ever heard of a strap footing? Strap footing arrangement is mostly used when the columns are eccentric due to property restriction. So in order to avoid the extra moment due to eccentricity of columns a tie beam is provided which connects two isolated footings. This type of tie beam is also called a strap beam. The horizontal main reinforcement of strap beams are developed into the isolated footings and the level of strap tie beam is slightly higher than the foundation level of the footing.

Applications or benefits of Tie beams

Do I need a tie beam for my foundation?

Well in most of the cases it is not always necessary to provide a tie beam over the foundation. However, if you are working on eccentric footing, a tie beam can be a necessity. It will fix points to reduce the unsupported length of the column.

But be sure to first pick up the reason why you need a tie beam for the foundation. Only then you’ll be able to decide the location of the tie beam. Like in strap beams, ties are provided at the footing level.

It could be. It all depends on many factors, including the soil you use and the varying vertical loads and lateral loads.

You may need a tie beam if you have separate footings. This will serve as a grade beam to transfer lateral loads.

It may also be necessary to strengthen the foundation to decrease differential settlement or to prevent eccentric movement of the footings in case there is any suspected bad material within the house footprint.

A tie beam may be necessary for other reasons. It could be a standard practice in your locality and everyone has them to save having to explain why they aren’t there during permit review.