Expansive soils are a nightmare for foundation experts and geotech engineers. They cause significant damage to lightweight structures like sidewalks and driveways. They can uplift building foundations and can result in damage of basements. As a result of settlement upon drying, expansive soils can result in cracks of walls and ceilings.Our today’s read is about expansive soils, particularly expensive clay soils. So, first, let’s talk about what these expensive clay soils are.

What is expansive soil?

In geotechnical engineering, expansive soils are defined as clayey soils that undergo excessive volumetric changes as a result of seasonal moisture fluctuations. Expansive soils are also sometimes referred to as heavy clay or fat clay soils. These clayey soils absorb water and swell to as much as 10% and upon drying can result in shrinkage cracks.

Clay is a very tiny particle. As a matter of fact, it’s so small that you cannot see an individual particle with a regular microscope. You need to take scanning tunneling microscope to be able to see a Clay particle. They have a positive affinity for water. Clay particles are positively charged while water is negatively charged and they are attracted to each other.

So, as the clay particles are so tiny and they also have the affinity for water; when the water comes around it, it spreads the particles apart and expands like a sponge. That’s all dried out. You put water on clay and it expands. That is what we refer to as expansive clay.

Clay is a very unique chemical component. It’s created from volcanic ash and is broken down by geologic processes to reach that very tiny particle. It’s distributed usually in flood events. Sometimes it’s distributed by ash coming from a volcano, usually in flat plains. You have a flood Event and the water comes out over the plain, settles down and leaves the deposits in river areas.

If the clay gets mixed in with the water, it carries it all the way to the ocean unless it has a big flood event and drops a big chunk of clay next to the river which can happen, but for the most part it’s flat now in like Say: fountain hills. We have a lot of clay and it’s a Mountainy hilly area right that used to be a flat plain and was raised up through geologic processes later on. So it’s not always just a flat plane. 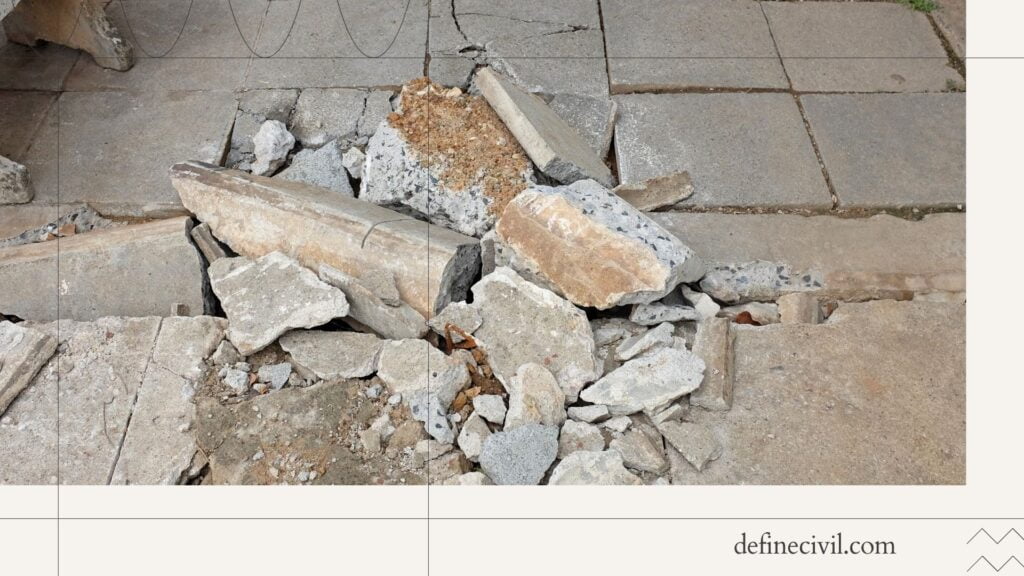 A lot of people claim to understand expansive clays when it’s a lot more complicated than it is. Geotechnical engineers define expansive soil with two characteristics – Liquid limit and plastic limit.

The plastic limit is the amount of that water that it takes to mold it so like roll it up into a cigar or something like that. Anyhow, the area between the plastic limit and the liquid limit gives you what they call the plasticity index or PI. That is the area that is most expansive, where all the Expansion occurs and it’s essentially, when you look at that soil, it looks fairly dry to the naked eye.

You can’t see it but expansive soil behaves as a solid. It’s not like a muddy or runny soil. It’s not that way at all, and so when it expands, it expands as a as a heave.

It expands as a solid mass and it doesn’t fill in every little nook and cranny as it goes up. It’s just kind of a balloon that just goes up. Some people believe that if you drill a hole in the slab and there’s a void underneath, it proves that the underneath soil is not an expansive soil. Well, that’s ridiculous and it is not how expansive soil works.

The effected portion of foundation

So what expansive soils mean for houses and foundations?

Anyhow, you can also get soils deep down that expand, but it’s much rarer. The reason is first of all, you can’t get moisture down there as easily. The second reason is well – let’s say its 10 feet down – you have 10 feet of soil sitting on top of it and that soil weighs 120 pounds of cubic foot.

So if it’s 10 feet down, you have 1200 pounds of weight on every square foot pushing down on that expensive soil. It’s probably not going to do a lot of uplifting with all that weight on top of it. So most of the problems occur in the upper few feet of the soil and they heave up slabs much easier than the heave-up footings.

Impact on slabs vs impact on footings

Footings have a lot of weight on them and they’re small. All the roof loads are bearing on them. On the other hand, slabs are flat and don’t have a lot of weight on them. You know furniture and people don’t weigh much in the grand scheme of things and so they’re easily lifted up, which is also why post tension slabs are susceptible to heave, because it’s a slab foundation.

Impact of temperature on expansive soils

First of all, in an arid climate moisture can accumulate underneath slabs and that starts out, in a drier condition. So, while it’s a fairly dry condition, you put a house on it. You have a small side yard. You drain the water off to this small side yard and a then a big monsoon event happens.

It’s going to get very muddy. It’s going to soak down into the soil a little bit and guess what it’s going to start to move underneath the slab. Because the slab in the middle is dryer and that dry soil remembers is attracted to water, it’s going to pull that water to it. That’s what we call clay suction.

And it literally does and geotechnical engineers call it negative pore pressure. There’s another. There are several other mechanisms that accumulate moisture underneath the slab one of them is temperature.

So if you have hot temperatures in the soil outside and really cool temperatures underneath the slab, the moisture flows from the hot to the cool. Anyhow, the next phenomenon is known as the stack effect. So the stack effect is when you have hot air that goes up into the attic and then out the vents that air inside the house has to be replaced, and it usually is replaced by air that is below the slab comes up into the house and that’s how radon gets into Houses.

Researchers have shown that if there is radon within a 20-foot radius of the outside of the house in expansive soils than that radon gets sucked into this airflow up through the slab and into the attic and out. In fact that’s quite often how people get radon into their homes.

Water is water but vapor is a gas. Along with all these other gases that goes along with that same air flow, but the problem is that when it gets to the center of the slab, it’s cooler and it condenses and it can no longer flow through the slab.

Like the other gases, it’s trapped, underneath in usually around the middle of a slab and the last mechanism, is the water vapor that comes up from the water Table, usually 300 feet down that water vapor makes itself.

These four mechanisms in a dry environment will continue to accumulate water, underneath the slab. So there goes that water and vapor that eventually condenses the clay and it becomes watery. Therefore, we need mechanisms to control this mechanism and to mitigate it and keep it from building up. We need a system that basically dries the layer of air and dries the very surface of underneath clay.

The most effective treatment of expansive soils or clay is stabilization with additives. The most common additives include lime, fly ash, and cement. All these additives act to eliminate the expansive power of the clayey soils. Other methods of stabilization or treatment include pre-wetting, soil replacement, compaction control, moisture control, surcharge loading, and many thermal methods.

For backfills in foundation, experts recommend use of lime and other agents along with soils to minimize the swelling potential of soils. Cement is a good choice when you need higher strength at shorter period of time. Anyhow lime produces the maximum strength as compared with cement but has a curing period of 90 days. You can enhance the stabilizing impact by adding 10 to 12 % of Calcium Oxide CaO. Two common times of limes used for stabilizing are high magnesium and high calcium. The lime used is called hydrated lime and are known as calcium chloride.

Well, foundation experts recommend strip footing for expansive soils with little swelling pressure. However, for excessive swelling loads, you need to isolate the foundation from heaving of soils. For such, civil engineers recommend piers and under-reamed pile foundation.

Normal pile foundation is good for expansive soils with swelling potential below 20-30%. For highly-expansive soils under-reamed piles are used. The flexibility of pile is an important concept that helps in flattening the shrinkage. Even if these foundation doesn’t look feasible or suitable, the engineer may recommend removal of the soil or treatment to decrease the nuisance.